When I was a child, I found nothing more distressing than the sound made by a wonky cassette. It is a deeply unnatural sound. Whenever I heard it, my heart began to race and I felt physically sick. It was as if I had a real fear of this type of sound.

My primary school had a particular cassette player that was notorious for chewing up cassettes. It destroyed one tape that we had to use for singing Christmas carols. Time and again I had to listen to horrific sounds made by the irreparably damaged cassette. The feeling has stuck with me all these years.

Now the fear is largely gone. But I remain fascinated by the sound of decaying media. A lot of my favourite music makes a feature of it. 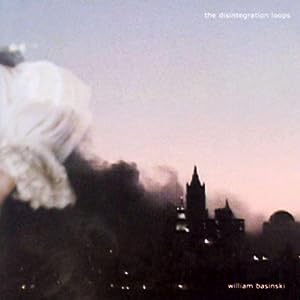 A couple of months ago I discovered The Disintegration Loops by William Basinski. It was the featured album on the BBC Radio 6 Music programme, Freak Zone. I was immediately captivated by this otherworldly and inhuman music.

The story goes that William Basinski was in the process of archiving some tape loops that he had made in 1982, transferring them to digital formats to save them before they deteriorated. He discovered some recordings that he had forgotten.

He soon realised that the very process of playing the tapes was causing them to disintegrate. As the tape passed over the head, the ferrite particles were flaking off the tape, altering the sound. Gradually, the tape loops disintegrated as they were being transferred to a digital format.

The archiving process simultaneously saved and killed the music. Moreover, it transformed the music into something new. This is what became The Disintegration Loops, which spans four CDs.

In the liner notes, William Basinski wrote, “The music was dying. I was recording the death of this sweeping melody.” This took on a further meaning when, upon completion of the “archiving” process, the September 11 attacks took place near the location of William Basinski’s studio. The Disintegration Loops came to signify the death of more than merely music.

Humans are obsessed with believing they have control over events, when in fact they have very little. That’s why lifts have a ‘door close’ button that doesn’t actually work — it’s just there to give you the illusion of control.

We find the destruction of recordings disturbing. Recordings give us the illusion of control — of being able to capture an event and recreate it forever. When nature takes its toll on recordings, this illusion is shattered. I think that is why I felt sick when listening to destroyed recordings as a child. What was once a safety crutch turns round and punches you in the face.

This is why I am interested in aleatoric music, which focuses on chance elements. John Cage’s 4′33″ is possibly the prime example of aleatoric music. The point Cage was making was that, even when you dictate that a piece of music should be entirely silent, nature will ensure that this will not happen.

4′33″ is not a silent piece, as it is often described. It is in fact a very noisy piece, because it casts the spotlight on the “unwanted” noise that is constantly around us in nature.

The Disintegration Loops brings similar questions to the table. The very process of saving the original loops destroyed them. But it is this destruction that makes this music noteworthy.

William Basinski sought to take control by attempting to preserve these recordings by transferring them to a digital format. But in doing so, he lost any control he had. Nature had intervened, and the final outcome was out of his hands.

The result is an album that has the ability to surprise, in a way that a human composer would struggle to. The looping nature of the music gives it a quality of familiarity, but the slow deterioration of the tapes means that that you have no idea what’s going to come next. The music is repetitive, but alive — and decaying.

It helps that there is clearly something to the original recordings. The music is beautiful, even though it is being destroyed as we listen to it. But there is something spooky and otherworldly about it to. This is music that we weren’t supposed to hear.

While I have been describing the process as destruction, it was in fact creation. It was just a different type of creation — unintentional and uncontrollable. These tape loops, as beautiful though they clearly were, would probably not be significant if it wasn’t for this. And that in itself makes The Disintegration Loops one of the most fascinating albums I know of.