I have recently discovered that, via the wonder of Amazon, it is possible to get your hands on old albums on CD for quite reasonable prices. It’s very helpful if you don’t live near a Fopp.

I’m particularly keen on hoovering up albums from the 1990s. From the age of about nine I was already into music in a serious way. But with my income being only 50p a week, it took several months to scrape together enough money to buy even one album I might have been interested in.

I have never seriously considered getting those CDs by bands like Shed Seven, mostly because I suspect that they are not actually any good. But now I may start to catch up on it all.

Let’s face it, at around a fiver a pop, there is not much to lose. You are lucky if you can get half a Domino’s pizza for that price, and that only makes you feel ill. Instead, you could end up getting some quite good music! 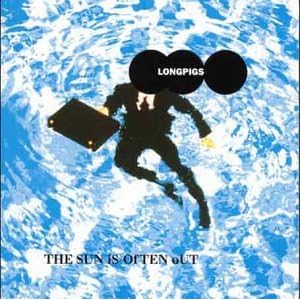 One of those bands that I liked as a kid — but not quite enough to buy their album — was Longpigs. I was chivvied along into buying their album after watching the documentary The Beat is the Law, which is about the Sheffield music scene of the 1980s and 1990s. The film culminates with the rapid rise of Longpigs, and their equally rapid burnout.

Hearing their hit singles again, which I probably hadn’t heard properly for about 15 years, was really exciting. Now I am convinced that She Said is one of the best songs ever written! They really don’t make them like this any more.

You can very much tell it’s from the 1990s. It has a lot of those then-fashionable little flourishes. It reminds me a lot of The Bends-era Radiohead, from around the same time.

Something else that struck me is that this album, The Sun is Often Out, has rather blatantly been front-loaded with all of the hit singles at the start of the album. It’s quite a sneaky tactic designed to make you think the album is brilliant when you start listening to it, then hope you forget to pay attention to the second half. It used to happen all the time, but I think you see it less now. Or maybe that’s just on the albums I buy these days.

The CD booklet also contains a cut-out page for you to fill in and send off to join the Longpigs mailing list! You can also leave a message on the Longpigs answerphone — another very 1990s thing. You just don’t see that any more. I wonder what these bands ever did with the answerphone messages they received.