The music of The Tomorrow People 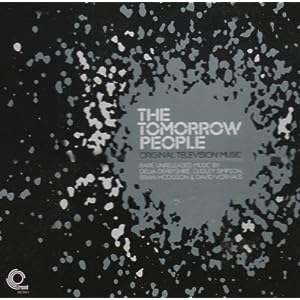 Recently, I finally managed to get my hands on The Tomorrow People, a CD of music from the 1970s ITV programme. I’ve been meaning to buy it for years.

The majority of the music on this CD is from a library album, ESL 104. This contained music by David Vorhaus, Nikki St George and Li De La Russe.

Nikki St George was a pseudonym for Brian Hodgson. Li De La Russe was a psudonym for Delia Derbyshire. Both are electronic music legends, chiefly known for their work for the BBC Radiophonic Workshop. All three musicians had worked together as White Noise to create An Electric Storm, one of the greatest electronic music albums of all time.

Brian Hodgson and Delia Derbyshire had to use pseudonyms as they were working for the BBC at the time. One of their most important jobs was to create music and sound effects for Doctor Who. Indeed, Delia Derbyshire was responsible for the Doctor Who theme tune itself.

How funny that their music would also end up on ITV’s attempt at their own Doctor Who. But that probably sums up just how much they were giants of electronic music.

The CD also contains the theme tune by Dudley Simpson. What a belter. It must be one of the best theme tunes ever.

The Tomorrow People CD is available from the utterly vital Trunk Records.