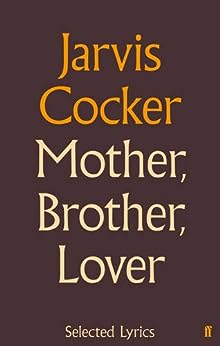 I don’t always get on well with song lyrics. All too often, the words to a song sound trite and naff. Their tendency to have to rhyme makes them seem absurd. Usually I find myself thinking, am I supposed to take these words seriously?

That is probably one reason why I am normally drawn more towards instrumental music, or music where the singing is difficult to make out, where the words are nonsensical, or even written in an invented ‘language’. There, the emotion is carried through the music. Without any corny words to put you off, the feeling seems more real.

I have been a fan of Pulp since I was nine years old. They were my first big musical love, and I have admired them ever since. There is no way I understood all of the lyrics when I was nine. Growing up listening to Pulp songs was a real journey as I slowly realised the full meanings of the words. Reading them in a book makes that seem all the more extraordinary.

Mother, Brother, Lover is a compilation of 66 Jarvis Cocker lyrics. It spans 30 years, from the very first Pulp album in 1983 to his latest solo album, with some unreleased songs in between.

But it begins with a superb essay on lyric writing, which is probably the highlight of the book. In it, Jarvis Cocker reveals that he, too, believes that the words to a song are not that important. “But once you’ve realised that… then the real fun of lyric-writing can begin.”

Then it’s on to Pulp’s first single, My Lighthouse. It is a charming and naive song about someone that lives in a lighthouse. In the notes that accompany almost every lyric, Cocker says, “[it] struck me as the height of sophistication at the time.”

Frustratingly, the notes are placed at the end of the book, separately to the lyrics themselves. This was not particularly useful, because invariably I wanted to read the notes — particularly since I already knew most of the lyrics. Two bookmarks are required for this book.

The songs are included in chronological order. This works well, allowing the reader to see the development of Jarvis Cocker as a songwriter.

Lyric-wise, the highlight for me is undoubtedly the Gift singles. Released in 1992 and 1993, and compiled on CD as Intro, seven of these nine songs are included in this book. Here, Jarvis Cocker was at his most vivid, writing about Sheffield, relationships, sex and society in the most colourful manner. It’s everything, especially the kitchen sink.

Every Pulp album that contains lyrics in the booklet warns the reader: “NB: Please do not read the lyrics whilst listening to the recordings.” Jarvis Cocker feels that doing so ruins the power of the lyrics. “Lyrics are not poetry,” he says. So special effort has been made to lay out the words to suit the format of the book, rather than adhere to the structure of the song.

It is a bizarre experience to read words that I am so familiar with, but divorced from the music they were originally designed to be with. At times it was impossible not to hear the music as I read the words. On the other hand, it gives the lyrics a new dimension. Many of the songs now seem more open, shocking and real.

Despite their inconvenient placement at the back of the book, the notes are the meat of the book for me. They add some background, further bringing the songs to life (although they are perhaps sometimes over-eager to explain even the most obvious of references). For instance, the notes to the song His ’n’ Hers include transcripts of some of the extraordinary improvisations and audience interactions that took place when it was performed live.

Some other notes are surprisingly brief. Common People gets just a few lines, when you could easily write an essay on it. In fact, the BBC once broadcast an hour-long documentary about this one song.

It is also a shame that some of my favourite songs have not been included. Only five songs from their pre-Gift material are included — and nothing at all from their second album Freaks. I would have liked to have seen a lot more of these songs included. But this is a small niggle, and with 66 songs included you can’t complain.

I am fascinated by Pulp, and I have read several books about them. But there is still more to learn, and this book contained plenty of new information that places their material in a new light. If you are a fan of Jarvis Cocker or Pulp, I would get your hands on this book.